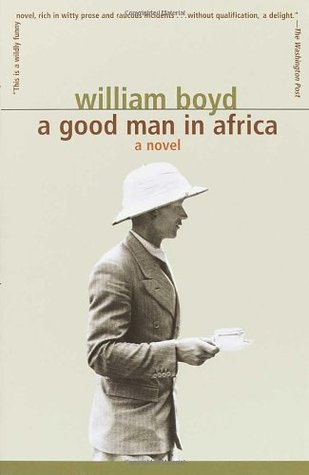 A Good Man in Africa

A Good Man in Africa – by William Boyd

In the small African republic of Kinjanja, British diplomat Morgan Leafy bumbles heavily through his job. His love of women, his fondness for drink, and his loathing for the country prove formidable obstacles on his road to any kind of success. But when he becomes an operative in Operation Kingpin and is charged with monitoring the front runner in Kinjanja’s national elections, Morgan senses an opportunity to achieve real professional recognition and, more importantly, reassignment.

After he finds himself being blackmailed, diagnosed with a venereal disease, attempting bribery, and confounded with a dead body, Morgan realizes that very little is going according to plan.

Of Scottish descent, Boyd was born in Accra, Ghana on 7th March, 1952 and spent much of his early life there and in Nigeria where his mother was a teacher and his father, a doctor. Boyd was in Nigeria during the Biafran War, the brutal secessionist conflict which ran from 1967 to 1970 and it had a profound effect on him.

At the age of nine years he attended Gordonstoun school, in Moray, Scotland and then Nice University (Diploma of French Studies) and Glasgow University (MA Hons in English and Philosophy), where he edited the Glasgow University Guardian. He then moved to Jesus College, Oxford in 1975 and completed a PhD thesis on Shelley. For a brief period he worked at the New Statesman magazine as a TV critic, then he returned to Oxford as an English lecturer teaching the contemporary novel at St Hilda’s College (1980-83). It was while he was here that his first novel, A Good Man in Africa (1981), was published.

Boyd spent eight years in academia, during which time his first film, Good and Bad at Games, was made. When he was offered a college lecturership, which would mean spending more time teaching, he was forced to choose between teaching and writing.

Boyd was selected in 1983 as one of the 20 ‘Best of Young British Novelists’ in a promotion run by Granta magazine and the Book Marketing Council. He also became a Fellow of the Royal Society of Literature in the same year, and is also an Officier de l’Ordre des Arts et des Lettres. He has been presented with honorary doctorates in literature from the universities of St. Andrews, Stirling and Glasgow. He was appointed Commander of the Order of the British Empire in 2005.

Boyd has been with his wife Susan since they met as students at Glasgow University and all his books are dedicated to her. His wife is editor-at-large of Harper’s Bazaar magazine, and they currently spend about thirty to forty days a year in the US. He and his wife have a house in Chelsea, West London but spend most of the year at their chateau in Bergerac in south west France, where Boyd produces award-winning wines.
(less)

This book does not appear to be available as an audiobook. Any idea why?