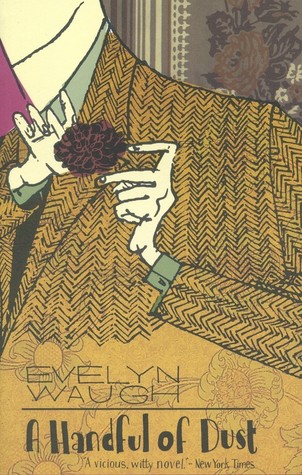 A Handful of Dust

A Handful of Dust – by Evelyn Waugh

Laced with cynicism and truth, “A Handful of Dust” satirizes a certain stratum of English life where all the characters have wealth, but lack practically every other credential. Murderously urbane, it depicts the breakup of a marriage in the London gentry, where the errant wife suffers from terminal boredom, and becomes enamoured of a social parasite and professional luncheon-goer.

Evelyn Waugh’s father Arthur was a noted editor and publisher. His only sibling Alec also became a writer of note. In fact, his book “The Loom of Youth” (1917) a novel about his old boarding school Sherborne caused Evelyn to be expelled from there and placed at Lancing College. He said of his time there, “…the whole of English education when I was brought up was to produce prose writers; it was all we were taught, really.” He went on to Hertford College, Oxford, where he read History. When asked if he took up any sports there he quipped, “I drank for Hertford.”

In 1924 Waugh left Oxford without taking his degree. After inglorious stints as a school teacher (he was dismissed for trying to seduce a school matron and/or inebriation), an apprentice cabinet maker and journalist, he wrote and had published his first novel, “Decline and Fall” in 1928.

In 1928 he married Evelyn Gardiner. She proved unfaithful, and the marriage ended in divorce in 1930. Waugh would derive parts of “A Handful of Dust” from this unhappy time. His second marriage to Audrey Herbert lasted the rest of his life and begat seven children. It was during this time that he converted to Catholicism.

During the thirties Waugh produced one gem after another. From this decade come: “Vile Bodies” (1930), “Black Mischief” (1932), the incomparable “A Handful of Dust” (1934) and “Scoop” (1938). After the Second World War he published what is for many his masterpiece, “Brideshead Revisited,” in which his Catholicism took centre stage. “The Loved One” a scathing satire of the American death industry followed in 1947. After publishing his “Sword of Honour Trilogy” about his experiences in World War II – “Men at Arms” (1952), “Officers and Gentlemen” (1955), “Unconditional Surrender” (1961) – his career was seen to be on the wane. In fact, “Basil Seal Rides Again” (1963) – his last published novel – received little critical or commercial attention.

Evelyn Waugh, considered by many to be the greatest satirical novelist of his day, died on 10 April 1966 at the age of 62.