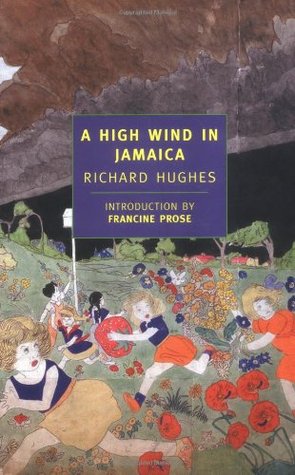 A High Wind in Jamaica

New edition of a classic adventure novel and one of the most startling, highly praised stories in English literature – a brilliant chronicle of two sensitive children’s violent voyage from innocence to experience.

After a terrible hurricane levels their Jamaican estate, the Bas-Thorntons decide to send their children back to the safety and comfort of England. On the way their ship is set upon by pirates, and the children are accidentally transferred to the pirate vessel. Jonsen, the well-meaning pirate captain, doesn’t know how to dispose of his new cargo, while the children adjust with surprising ease to their new life. As this strange company drifts around the Caribbean, events turn more frightening and the pirates find themselves increasingly incriminated by the children’s fates. The most shocking betrayal, however, will take place only after the return to civilization.

The swift, almost hallucinatory action of Hughes’s novel, together with its provocative insight into the psychology of children, made it a best seller when it was first published in 1929 and has since established it as a classic of twentieth-century literature – an unequaled exploration of the nature, and limits, of innocence.

Can anyone recommend any other books, fiction or nonfiction, which describe children under 10 as well as ‘high wind’?