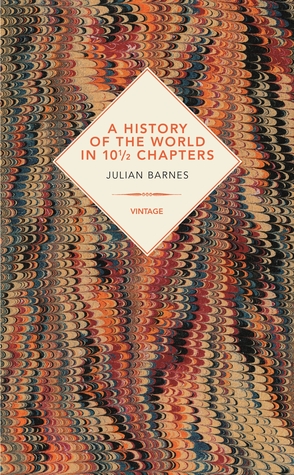 A History of the World in 10½ Chapters

A History of the World in 10½ Chapters – by Julian Barnes

Beginning with an unlikely stowaway’s account of life on board Noah’s Ark, A History of the World in 10½ Chapters presents a surprising, subversive, fictional history of earth told from several kaleidoscopic perspectives. Noah disembarks from his ark but he and his Voyage are not forgotten: they are revisited in on other centuries and other climes – by a Victorian spinster mourning her father, by an American astronaut on an obsessive personal mission. We journey to the Titanic, to the Amazon, to the raft of the Medusa, and to an ecclesiastical court in medieval France where a bizarre case is about to begin…

This is no ordinary history, but something stranger, a challenge and a delight for the reader’s imagination. Ambitious yet accessible, witty and playfully serious, this is the work of a brilliant novelist.

Julian Patrick Barnes is a contemporary English writer of postmodernism in literature. He has been shortlisted three times for the Man Booker Prize – Flaubert’s Parrot (1984), England, England (1998), and Arthur & George (2005), and won the prize for The Sense of an Ending (2011). He has written crime fiction under the pseudonym Dan Kavanagh.

Following an education at the City of London School and Merton College, Oxford, he worked as a lexicographer for the Oxford English Dictionary. Subsequently, he worked as a literary editor and film critic. He now writes full-time. His brother, Jonathan Barnes, is a philosopher specialized in Ancient Philosophy.

He lived in London with his wife, the literary agent Pat Kavanagh, until her death on 20 October 2008. (less)

This is a novel ( it says so on the cover) ; however it is filed under the Dewey decimal system at libraries . Does anyone know why ?