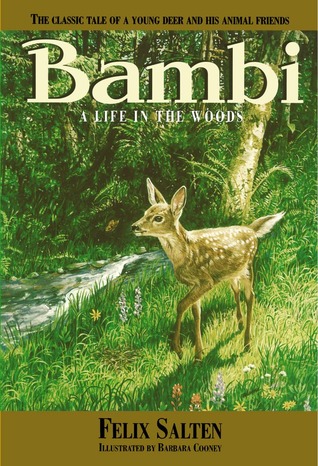 The Prince of the Forest
Bambi’s life in the woods begins happily. There are forest animals to play with — Friend Hare, the chattery squirrel, the noisy screech owl, and Bambi’s twin cousins, frail Gobo and beautiful Faline.
But winter comes, and Bambi learns that the woods hold danger — and things he doesn’t understand. The first snowfall makes food hard to find. Bambi’s father, a handsome stag, roams the forest, but leaves Bambi and his mother alone.
Then there is Man. He comes to the forest with weapons that can wound an animal. He does terrible things to Gobo, to Bambi’s mother, and even to Bambi. But He can’t keep Bambi from growing into a handsome stag himself, and becoming…the Prince of the Forest.

There is more than one author with this Name.

Felix Salten was an Austrian writer. He was born Siegmund Salzmann in Budapest, Hungary. When he was three weeks old, his family moved to Vienna, Austria. Many Jews were immigrating into the city in the late 19th century because Vienna had finally granted full citizenship to Jews in 1867.

When his father went bankrupt, Felix had to quit school and begin working in an insurance agency. He also began submitting poems and book reviews to journals. He became part of the Young Vienna movement (Jung Wien) and soon received work as a full-time art and theater critic in the Vienna press. In 1901 he founded Vienna’s first, short-lived literary cabaret. In 1900 he published his first collection of short stories. He was soon publishing, on an average, one book a year, of plays, short stories, novels, travel books, and essay collections. He also wrote for nearly all the major newspapers of Vienna. He wrote film scripts and librettos for operettas. In 1927 he became president of the Austrian P.E.N. club.

His most famous work is Bambi, which he wrote in 1923. It was translated into English in 1928 and became a Book-of-the-Month Club hit. In 1933, he sold the film rights to Sidney Franklin for $1,000, who later transferred the rights to the Walt Disney studios. Disney released its movie based on Bambi in 1942.

Life in Austria became perilous for a prominent Jew in the 1930s. Adolf Hitler had Salten’s books banned in 1936. Two years later (1938), after Austria had become part of Germany, Salten moved to Zurich, Switzerland, where he lived until his death.

He was married to the actress Ottilie Metzl, and had two children: Paul and Anna-Katherina. He wrote another book based on the character Bambi, titled Bambi’s Children: The Story of a Forest Family, 1939. His stories “Perri” and “The Hound of Florence” inspired the Disney films Perri and The Shaggy Dog.

Do you know what are the differences between this book and the Disney animated movie?