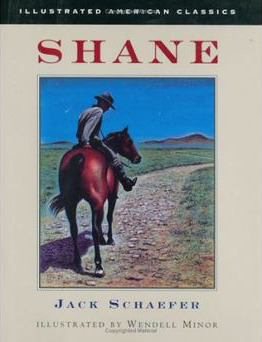 A stranger rode out of the heart of the great glowing West, into the small Wyoming valley in the summer of 1889.
It was Shane, who appeared on the horizon and became a friend and guardian to the Starrett family at a time when homesteaders and cattle rangers battled for territory and survival. Jack Schaefer’s classic novel illuminates the spirit of the West through the eyes of a young boy and a hero who changes the lives of everyone around him. Renowned artist Wendell Minor provides stunning images and a moving introduction to this new edition of Shane, the ultimate tale of the Western landscape.

Schaefer was born in Cleveland, Ohio, the son of an attorney. He graduated from Oberlin College in 1929 with a major in English. He attended graduate school at Columbia University from 1929-30, but left without completing his Master of Arts degree. He then went to work for the United Press. In his long career as a journalist, he would hold editorial positions at many eastern publications.

Schaefer’s first success as a novelist came in 1949 with his memorable novel Shane, set in Wyoming. Few realized that Schaefer himself had never been anywhere near the west. Nevertheless, he continued writing successful westerns, selling his home in Connecticut and moving to Santa Fe, New Mexico in 1955.

He died of heart failure in Santa Fe in 1991. Schaefer was married twice, his second wife moving to Santa Fe with him.

Why did Shane ran away?